Za Andetti nisam cuo nista novo. Ali se ozbiljno prica da bi ovo mogla biti poslednja sezona Jimmie Johnsona.
When I die, I want to be buried faced down so that anyone who doesn't like me can kiss my ass.
Vrh

Zeleo sam par puta da idem u Austin ili u Kanadu na F1 trku, ali zaista preskupo.
When I die, I want to be buried faced down so that anyone who doesn't like me can kiss my ass.
Vrh

Zadnjih godina Michigan je staza sa najvecim brzinama.
When I die, I want to be buried faced down so that anyone who doesn't like me can kiss my ass.
Vrh 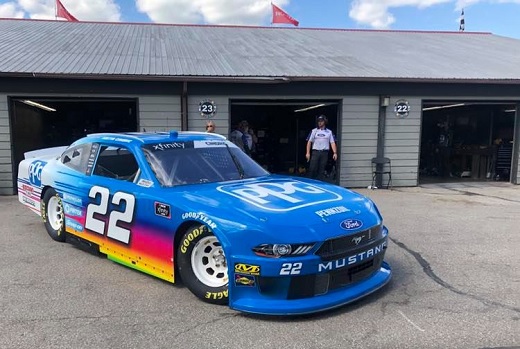 NASCAR Watkins Glen ratings lowest in at least 20 years
While ratings have increased for several NASCAR races this season, the declines are starting to pile up.

Chase Elliott‘s win ranks as the lowest rated edition of the race since at least 1999 and the least-watched since at least 2001. The previous lows were set in 2017.

https://m.ranker.com/crowdranked-list/m ... can-sports
When I die, I want to be buried faced down so that anyone who doesn't like me can kiss my ass.
Vrh 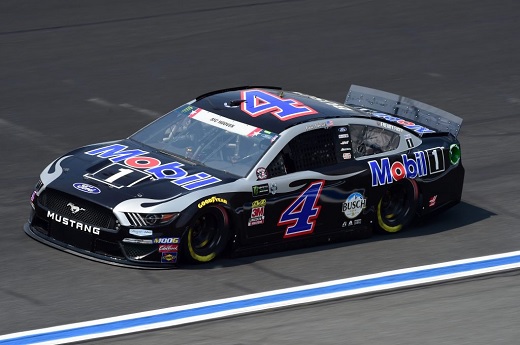 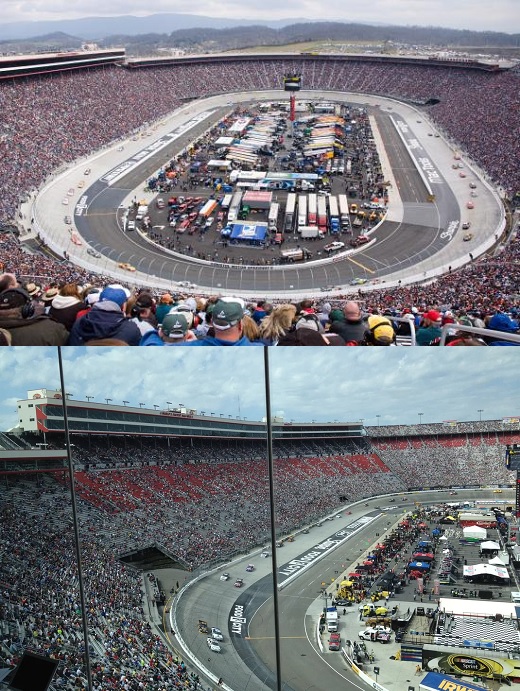 
Why are TV Ratings So Important?

TV ratings are incredibly important to any sports league, and a TV deal is a main bloodline for a league. To put it frank – a big TV deal guarantees that a sports league will have great exposure, coverage, an audience, and profit.

Let’s put it in some perspective and get the TV dollar numbers from the NFL, America’s largest sports league. For the 2019 season, each individual NFL team gets $255 million from the NFL’s TV deal with CBS, FOX, ESPN, and NBC, and the amount increased from $99.9 million in 2010, or a growth rate of 150%. That is insane. This coincides with TV ratings reaching highs in 2014, teams getting new stadium deals, and the NFL greatly expanding its footprint worldwide; Europe and Latin America have become prime markets for the NFL to conquer, and they have done quite well too.

For more perspective, part of why the English Premier League formed in the first place was over TV contracts and broadcasting rights. How has that benefited the Premier League? A fuckton. A review by Deloitte in 2014 showed that during the 2012-13 season, the Premier League generated more revenue than any other soccer league in the world, at a total of £2.5 billion. Imagine that number in 2019, with the league being broadcast throughout the world and being more popular than ever.

So, what are the implications for Major League Soccer? The current MLS TV deal with FOX, ESPN, and Univision runs through 2022, and is paid a figure of $90 million per year. Compare this to the WNBA, which receives $12 million per year, or NASCAR’s TV deal, which is estimated to be worth up to $8 billion.

When you put it in this perspective, these are serious numbers. Imagine MLS getting a more lucrative TV deal; this could allow owners to spend more money, allocate more resources to make individual teams more visible, increase the cap league-wide, etc.

TV ratings lead to a bigger TV deal, which means more money for the league, and it means that the league will become bigger.

League Ratings Are Rather Low, Should This Be Concerning?

Let’s put things in better context. Heading into 2015, Major League Soccer had averaged 200,000 viewers per game, which was a milestone for a burgeoning league. The increase in numbers (aided by the 2014 FIFA World Cup) allowed MLS to score a rather sweet TV deal. No longer would MLS be bumped to obscure networks such as Fox Soccer Channel or Galavision but would instead get exposure on ESPN/Fox Sports, alongside local broadcasters. Since then, MLS average ratings have consistently increased, and in 2018 the average for a game was 276,000.

Here’s where I think MLS fans are missing the forest from the leaves; MLS TV ratings should not necessarily be compared to any other American sport (NFL, NBA, MLB, NASCAR), or even another league (EPL & Liga MX, which have more money to spend anyway, and have a stronger established viewing base). Rather, we need to look at average league ratings throughout the years and make the comparison there.

Because MLS has been able to: a) consistently increase its TV ratings b) expand into new markets with teams that are immediately popular c) stay stable and profitable – this indicates that MLS is going to potentially have a sweet TV deal come 2022. ESPN, Fox, and Univision didn’t sign off on that deal in 2015 and expecting NFL-like numbers or even EPL/Liga MX numbers; they knew that this was a very long-term investment, and that the numbers will grow over time. The 2020s will not only give MLS much larger viewer numbers, but the 2026 FIFA World Cup will provide a huge potential boon. This can only further help the league negotiate a bigger TV deal.

In an even more positive sign, terrestrial FOX broadcasts averaged 988,000 in 2018, which is a great number given the context of the league’s history on television. I also wonder whether the networks have internal numbers which show better numbers than Nielsen indicates.

One final thing that I should note – the 2015 MLS TV deal was signed when Atlanta, Los Angeles FC, and Minnesota had not yet entered the league; all of these teams are in major media markets, so we can only assume that a future TV deal will take this into consideration. Also remember that Austin, Miami, and Nashville will be in the league before that contract is negotiated, in addition to Sacramento and St. Louis likely being in the league by 2022. (Other note – I figure Detroit, despite its stadium issues, has this in its favor, and I suspect MLS is trying to get a team in Detroit no matter what)

That doesn’t mean that things are all peaches and roses; MLS being unable to consistently get a true national audience interested in a game, its lack of reach in some TV markets (Detroit, St. Louis, etc.) or irrelevance in others (Boston, Chicago, New York) are all issues the league needs to work out. While an MLS game may never beat out even the worst NFL match-up, MLS should be looking to come close to numbers posted by Liga MX or the English Premier League (which are both foreign); to not even come that close isn’t comforting. a ovde opet drugacije pise, da je MLS 2017 prihod 851 mil. $ a Nascara 660.

Sta mislis hoce li Jimmie Johnson u penziju na kraju sezone? 44 godine, poslednji put je pobedio jos u junu 2017. godine na Doveru.
When I die, I want to be buried faced down so that anyone who doesn't like me can kiss my ass.
Vrh

to samo on zna. Here are the full week sports ratings for Monday July 29 through Sunday August 4, 2019. Eligible programs include sporting events on broadcast and cable networks (minimum audience size 300K P2+ live+same day). Programs are grouped by sport and ranked within each sport by P2+ audience size. 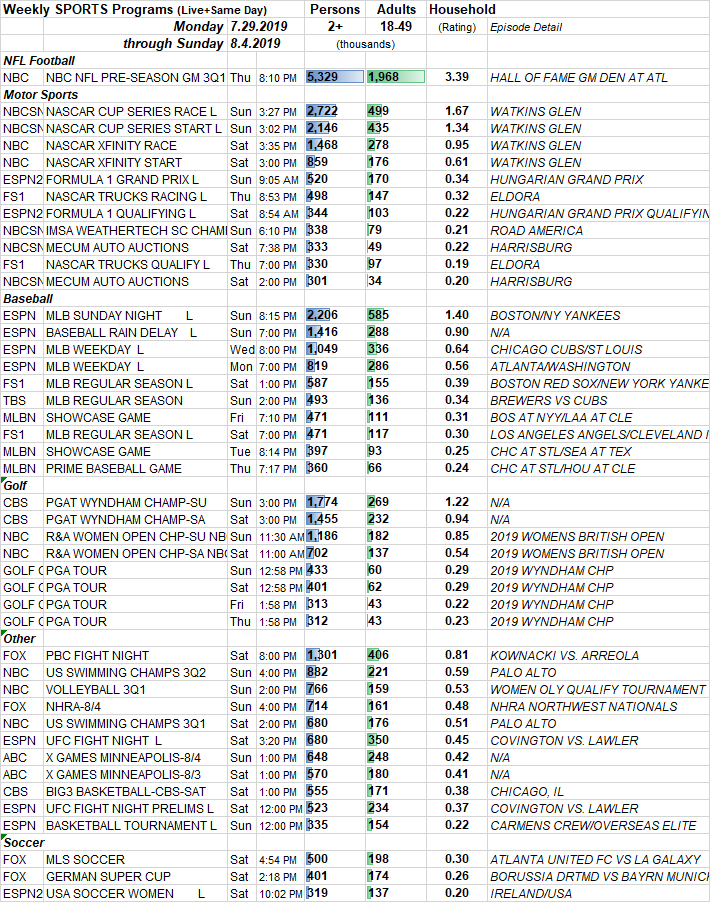 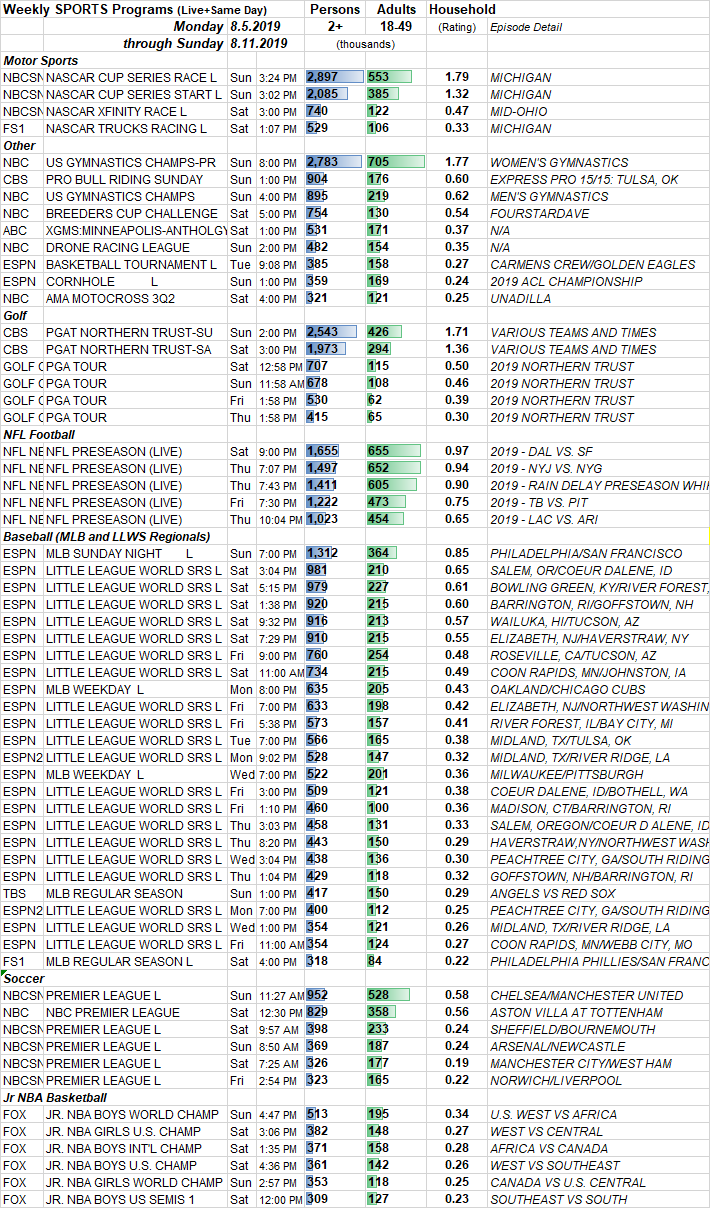 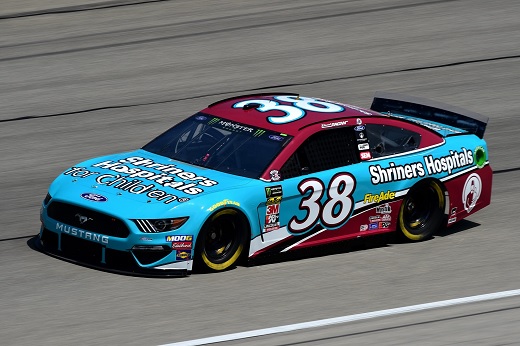